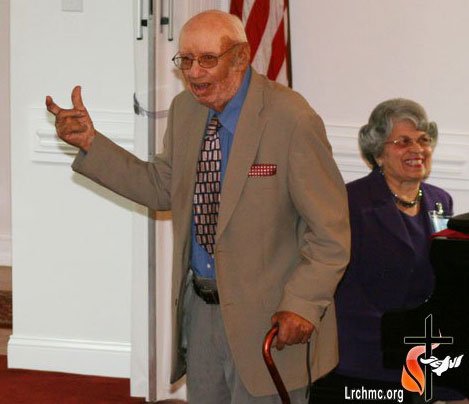 This past week the Lumber River Conference of the Holiness Methodist Church (LRCHMC) lost a good friend in the passing of Mr. Jason B Lowry. Although he left the Conference in the 1980’s one did not need to speak to him very long to see that he still had a great love for the conference in which he was reared and served for so many years. I was fortunate to be able to visit with Mr. Lowry on a number of occasions and gathered a wealth of knowledge from his life experiences. To understand the impact that his military service during World War II had on him and the death of his father during this time. To his College career and the obstacles he faced and endured to get an education, from him serving as a local teacher and administrator to being named the first director of admissions for Pembroke State University my alma mater.

But for me personally to be given a copy of two books which he had written as critiques of the (LRCHMC). To know the amount of time and effort he put into these works and the realization that looking back now to 1981 the year he presented his first analysis to the Conference Bar and see that the Spirit and knowledge he gave and to recognize that if the advice he imparted then would have been taken we indeed would have a very different Conference today. In his second offering, Mr. Jason, asked a question of the presiding Bishop which I find almost prophetic “What programs have been developed and implemented across the entire Conference since you were elected Bishop?”

Being a student of the History of our conference it is ironic that today I can present the same question some thirty years later. What churches have been planted to build the kingdom of God here on earth? What ministries have been developed and implemented to impact the lives of people in our communities? What mission projects are up and going that would fail if not for our support? We recently had our Conference Clergy Course of Study taught by a highly qualified person who did an outstanding job in presentation and answering any questions that came up. What was sad was that most of our Conference Clergy (14 my own count) never saw the need or the requirement to attend the course at all. As Mr. Jason, wrote in his second book back in 1984 clergy don’t respond because they have no fear of consequences for their failure to perform. His answer was simple and to the point “let them truck on down the road.”

It is a fact that the success or lack thereof for any organization whether it be a local Ruritan club or an multibillion dollar conglomerate determines the outcome. The church is no different with weak leadership we have weak followers. I know what some are going to say well we can’t fail because we have Jesus on our side I submit to you look at the number of churches that have filed bankruptcy, shut their doors or are busy trying to stay afloat with no confessions of faith, no discipleship training and no laborers in the field. As Mr. Jason said “lack of preparation and dedication to the work of the kingdom of God on our part does not insure action on Christ part. Amen!