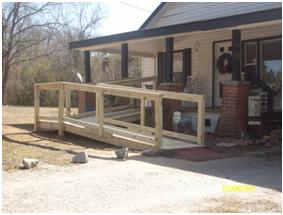 Fairmont- March 7, 2011  Mission work is never an easy thing to describe to people even within the church or among members who have been exposed to the word over a period of months and in some cases years. Over a period of pastoral oversight which span almost a quarter of a century it has been my experience that it is much easier to simply get people involved in the missions and let them learn and define for themselves what mission are and are not. On March 5, 2011 members and friends of New Bethel Holiness Methodist Church (NBHMC) met at the home of Sister Mary Ann Hunt one of the oldest members of the church and over ninety years old suffering from some debilitating health issues to build a wheel-chair ramp that would make it easier for Mrs. Hunt and her family to transport her in and out of the home. The morning was filled with fun and fellowship and in just a few hours the job was completed. A very special thanks goes out to the Official Board and members of NBHMC for supplying the materials for this project and to our Class Leaders Brothers Anthony Sweat and Wayne Swett for recognizing the need and to our Carpenters for Christ for coming by and lending a hand they were Chris Swett, Jeff McNeill, Ronnie McNeill, NJ McNeill, Devin McNeill, Caleb McNeill, Terry Hunt and Roy Spaulding. Every one enjoyed their opportunity to serve and hopefully learned just how easy it is to make a real difference in a person’s life. The beauty of this effort was seen right away when the next morning Mrs. Hunt was rolled down the ramp by her son Derwin and he stated “that it was so much easier on her and him and he was so grateful for the groups’ effort.”