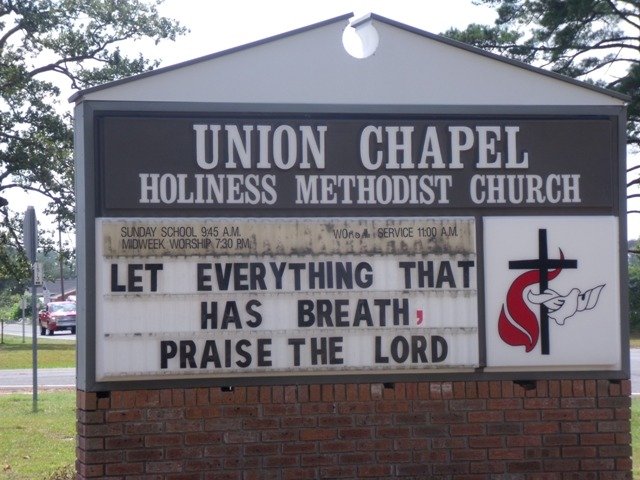 The Youth Praise Camp at Union Chapel Holiness Methodist Church held on August 14-15, 2011 was a HUGE success! There were more than 30 participants ages ranging from 4-40+ who came together for worship in devotion, songs of praise, and dramatic performance. The theme for the program was, “Let Everything that Has Breath Praise the Lord”. During opening remarks, Sister Kay Freeman shared with the group about her shared vision with Sister Angela Locklear and other youth leaders to see a church drama team reorganized at our church. The inspiration for the program theme was offered from bible scripture, Psalms 150:6. Kay recalled the idea when the Holy Spirit revealed to her about how God spoke the world into existence in Genesis 1:3 “And God said, Let there be light: and there was light.” The sun did not hesitate to appear, not did it shrink back and wait for the moon to shine in its stead, but rather the sun obediently responded to God’s command and it shone brightly on the earth to bring about the new day. So when God says, “Let everything that hath breath praise the Lord.” This is not just a suggestion or a recommendation, but more of a command. So we, as Christians must also unite our beams of light and share our voices of praise with this lost and dying world so that the rocks do not have to cry out praises to God in our place, as it is taught in Luke 19:28-40.

“We are not told how they (the rocks) would cry out.  Maybe instead of the palm branches having to be cut off the tree, maybe the palm trees would shed their branches onto the road, dropping their crowns in honor of him.  How would the rocks cry out, well, we get an idea on good Friday. When Jesus died on the cross, once again the Pharisees did not want it acknowledged that this Jesus on the cross was the Son of God crucified.  The disciples in fear had turned silent.  What happened…The Sun cried out the only way it could- by becoming dark from the 6th to the 9th hour. The rocks cried out the only way they could, the earth shook, graves were opened, saints arose to give glory to God, after all the disciples who were called to worship were hiding in fear for the Pharisees.” source


The second musical selection, entitled “Let the Rocks Keep Silent” was chosen as a means of teaching and honoring our collective commitment to PRAISE our Savior for His Goodness and Righteousness and for His Mercy upon each and every one of us. Sisters Heather Locklear and Kay Freeman shared devotions on praise with the students and Sister Jamie Goins shared opening activities (icebreakers) to reinforce the messages of praise and fellowship. Crafts were completed and lunch was provided. The final performances were drama selections; one by the Youth for Christ (YFC) entitled, “The Presence of the Lord” and the teens concluded the program with another drama performance to the song entitled, “I Will Rejoice”. Special thanks to Brothers, Willie Scott, Daniel Locklear, Kendrick Chavis, Rudy Freeman, and Sisters Diane Goins, Catrina Deese, Jackie Deese, Bonnie Locklear and Tasha Locklear for their assistance with food, registration and for organizing and chaperoning the event. We also extend our appreciation to the folks who supported and attended the performance. We look forward to sharing what we have learned with others and hope to share this program with the Lumber River Holiness Methodist Church Conference at the Young Peoples Singing on September 11, 2011 at Union Chapel Holiness Methodist Church at 5 pm. We invite everyone to come and be a part of this upcoming event!