“A Veteran of Service” – Riverside Welcomes Our New Pastor 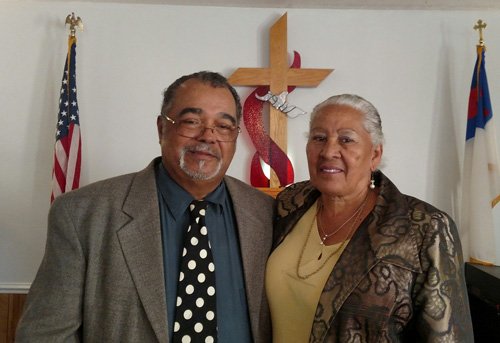 On Sunday, November 20th , Riverside “officially” welcomed Reverend Marvin Locklear as our new pastor. I say “officially” because Brother Marvin has actually been with us for a year serving as interim pastor in the absence of our former pastor Reverend Tom Morgan — who has been unable to serve due to an extended illness. (Riverside would like to take the time to thank Brother Tom for his years of service to Riverside, and to remind him that he is in our thoughts and prayers as he continues to endure his illness).

Brother Marvin comes to Riverside as “a veteran of service” – both for our country as well as for the Gospel.

To begin with, Brother Marvin’s service to our country spanned 21 years – from 1964 to 1985. During this time, he served in the U.S Army in five States (South Carolina, Georgia, Oklahoma, Kentucky, and North Carolina) and in three foreign countries (Germany, Korea, and Vietnam). He is a highly decorated Vietnam War veteran – his highest award received being for extraordinary heroism. Most of his service was with the 82nd Airborne in the artillery and paratrooper divisions – where he became a leader among men achieving the rank of Sergeant First Class.

Furthermore, Brother Marvin’s service for the Lord has been as adventurous as his military service. He has been in the ministry for 34 years – starting as an exhorter in 1982. Since then, he has served as an exhorter, local preacher, assistant pastor, and now as pastor. He received his Deacon’s Credentials in 1998 and Elder’s Credentials in 2005. During his years of service, he has been appointed by the bishop or elected to serve in several churches within our conference including Shoehill, Macedonia, and now Riverside.

“I came to know the Lord through and by my grandmother’s teaching, prayers, and testimony – both at Macedonia Church, and in her home, the fields, the woods and wherever or whenever I would find myself with her. Then after I was deployed to Vietnam my older sister, Betty Hammonds, would write to me to tell me how badly I needed Jesus in my life, because of the dangers of war. It got me to thinking and worrying a lot about dying and going to Hell. It took some more time for Christ to get me in the right time and place to get my heart ready to fully accept him into my heart and life. When He called I was ready – December 17, 1975 – My Second Birthday. Thank God! He waited on me!”

Brother Marvin life truly represents that of “a veteran of service” – both for our country and for the Lord. Therefore, on behalf of the congregation of Riverside Holiness Methodist Church, I would like to formally welcome our new pastor – Rev. Marvin Locklear — and his lovely wife, Cameliana, to our church. We look forward to serving with you both for many years to come.

“And I will give you pastors according to mine heart, which shall feed you with knowledge and understanding.” (Jeremiah 3:15 KJV)

“Preach the word; be instant in season, out of season; reprove, rebuke, exhort with all longsuffering and doctrine.”(2 Timothy 4:2 KJV)

“Study to shew thyself approved unto God, a workman that needeth not to be ashamed, rightly dividing the word of truth.” (2 Timothy 2:15 KJV)